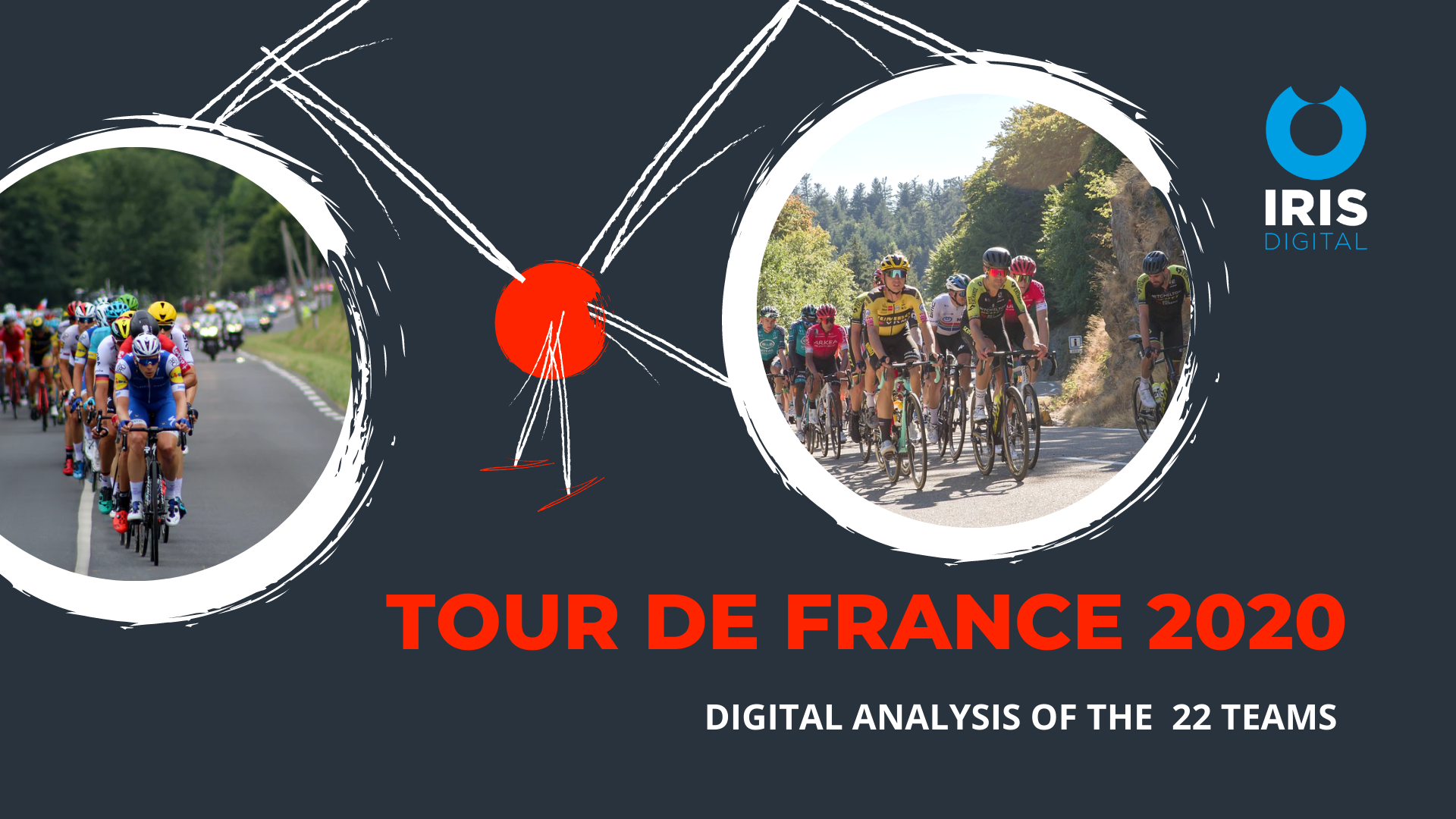 The recent Tour de France saw a fascinating final result on the road, and there were equally interesting results digitally. IRIS (Intelligent Research in Sponsoring) took a look at the link between road performances and digital performances, as well as the most improved teams digitally and the impact of the tour on French sponsors.

The 2020 Tour de France came to an exciting conclusion recently with the young Slovenian rider Tadej Pogačar of UAE Team Emirates being crowned as the surprise winner, and Movistar Team winning the team classification.

Intelligent Research in Sponsoring GmbH (IRIS) have analysed the digital performances of the teams and it is interesting to see that there is not yet the correlation between success on the road and digital performance. The ‘digital yellow jerseys’ were awarded to INEOS Grenadiers (for total followers) and Team Jumbo-Visma (for total engagement), based on Facebook, Instagram, Twitter & YouTube during the race. The big-budget British team INEOS Grenadiers only secured a top five finish on the road.

The most significant difference between sport performance and digital performance is from Team Bahrain McLaren, as they were not in either of IRIS’s top 10s for total followers or total engagement despite their sportive 3rd place finish in Paris. There's certainly an opportunity for the team to exploit further their digital potential in future races. This can be seen in the case of UAE Team Emirates, who due to possessing the winning individual rider, were able to get into 4th position in the IRIS ranking of engagement, despite not making the top 10 in terms of total followers. This suggests that success drives engagement and the likes of Team Bahrain McLaren could make the most of these opportunities in future.

IRIS also analysed the impact of the sponsors following the conclusion of the race, focusing specifically on French companies in their home event. The impact on Cofidis, AG2R Mondiale and Groupama was consistently positive, with the brand impact on Cofidis being a particularly high 883% - most likely due to this being the first year on the tour for the team. The more established AG2R Mondiale and Groupama therefore saw more understated yet impressive increases of 40% and 27% respectively. There were positive increases in the total followership of these brands too throughout the race, with AG2R Mondiale getting close to the 500,000 follower mark. As with UAE Team Emirates, being able to post successful (based on the riders’ performance) content enabled AG2R Mondiale to have the highest media value of any individual post made during the games by any of the three French sponsors. A Facebook post congratulating Nans Peters on winning the eighth stage of the Tour being worth 7'700 EUR in Advertising Equivalent Value.

AG2R La Mondiale and Groupama-FDJ were also the highest digital climbers of the teams, along with UAE Team Emirates. The IRIS Performance Index – a sophisticated ranking that looks at engagement, number of posts, views and followers – saw these three teams make the biggest leap up the table. Groupama-FDJ and UAE Team Emirates both jumped three places higher in the month of the race compared to the six months before, whereas AG2R LA MONDIALE Pro Cycling Team pedalled past their competitors to move up five ranks in the table.

With the upcoming Giro d'Italia and Vuelta a España running simultaneously this year, the social media teams will also be facing an uphill challenge to maintain their digital performances as the 2020 season races to an exciting conclusion!

IRIS GmbH developed unique measurements to help companies to shape their digital strategy for the future. Learn more about the Digital Fitness Check project during the next months with regular insights and best practice examples.

The peak of the epidemic has passed and everyone is wondering how International Sport Federations handled the crisis period. We had a look at the overall performances and at the impact of the measures taken on key KPIs such as views and engagement.